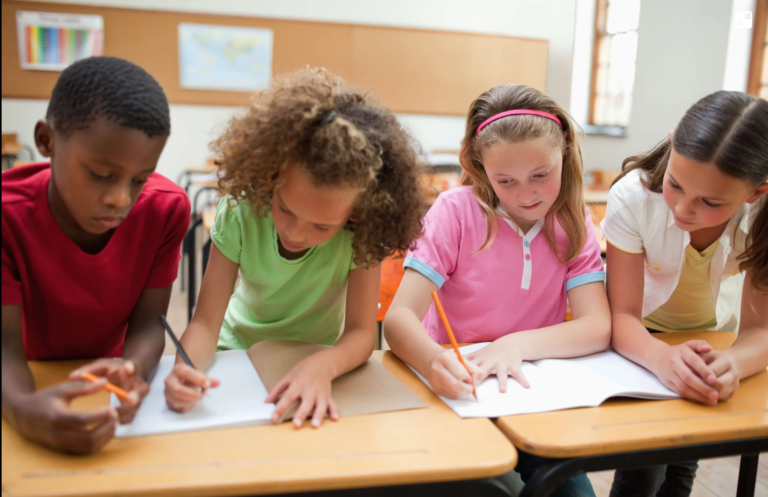 By Marissa King
Reposted from Edutopia

While it can be tempting to focus only on routines and academics to build classroom culture, a strong classroom culture hinges on healthy social and emotional learning (SEL). Do you want kids to carefully listen to their peers before shouting out an answer? They’ll need a dose of self-regulation. Do you wish students would savor the challenge of a math problem instead of throwing up their hands in frustration? It will take self-determination and the skills to recover from failure.

Using shared narratives is an effective strategy to build positive classroom culture while introducing or reinforcing SEL skills. In addition, it requires minimal teacher prep and is easily customized to fit different kinds of subject matter.

To introduce shared classroom narratives, collect a set of stories focused on specific SEL skills, such as taking responsibility for personal actions, asking for help, or working as a team. As with the community stories used to build group identity in cultures around the world, the goal is to find stories that exemplify a character trait or skill that you value in your classroom.

During my first year as a fifth-grade teacher, I built the introductory English language arts unit around stories of people overcoming challenges. I started with the story of the youngest Nobel Prize laureate, Malala Yousafzai, fighting for the right of girls to attend school despite violent attacks. Malala’s story, read in both article and narrative forms, added the perfect mix of inspiration and relatability while clearly illustrating the targeted SEL skill of persevering in the face of challenge.

Other texts in the unit continued the theme of perseverance. Students followed young Esperanza from Esperanza Rising, by Pam Muñoz Ryan, as she grappled with sudden familial change and loss of wealth. They struggled along with Parvana, protagonist of The Breadwinner, as she faced unsettling economic and life changes while society crumbled around her. Each story met critical academic objectives while targeting SEL skills. When things got tough in class, we borrowed strategies from Esperanza, Malala, and Parvana to remind ourselves not to give up. Their stories became class rallying cries for persevering through challenges: “Stick with it like Malala!” “Take on a new challenge like Parvana!”

Students wrote their own narratives of overcoming challenges to add to our class canon. Even a short writing assignment can add crucial stories of when a student successfully used an SEL skill in another area of his or her life.

Ideally, shared narratives come directly from class subject matter. When students learn about a mathematician who persevered through failure, they get important subject knowledge context and the underlying message about the importance of perseverance.

Look for SEL-related narratives during class throughout the year. When you come across a historical anecdote in the textbook or see a group of students showing teamwork skills during science lab, pause the class to point out the example.

Keep a visual reminder of class SEL narratives for quick reference during a pep talk or individual conversation. In my fifth-grade classroom, we posted a one- or two-sentence summary of each narrative under a big heading that named the SEL skill. If wall space is in short supply, a virtual list works well. Find ways to return to your chosen narratives repeatedly throughout the year so that they truly become community stories.

Each story serves as an illustration of how to use SEL skills. Just like building academic skills or procedural fluency, SEL skill development takes practice and coaching.

Narratives not only serve to introduce a skill but also work as feedback tools. When students collapse into defeat at the first sign of a challenge, I gently guide student reflection for how their actions are matching up to Malala’s resilience. They might note that Malala actually got frustrated too and considered giving up, but she recovered by employing a specific SEL skill. For sports-obsessed students, I like to pull in articles and short stories featuring famous athletes. If their favorite basketball player has a story about handling a loss or collaborating with a teammate, my fifth-grade student will perk up at the chance to give the SEL skill a try.

Build a classroom library of SEL narratives early, and add to them often so that you’ll be ready to employ them in more trying moments. Establish a list of focus SEL skills at the beginning of the year, and then prioritize their rollout based on class needs. Some years I’ve prioritized managing anger, while other classes have needed more focus on building relationships or self-advocacy.

Lay the foundation for SEL skills early in the year. By the time a crisis hits, it’s too late to introduce a shared SEL narrative. Students rarely have the patience or fortitude to listen carefully to a new story when they’re tearfully managing a loss or balling their fists in anger.

Not all students relate to each story, so choose multiple stories that emphasize the same skill in different contexts. Malala’s story is an impactful way to learn about overcoming challenges, but it might not help students whose challenges are ones without a perpetrator of injustice, so I might use the book Spare Parts to illustrate how an underresourced robotics team persevered even when their competition seemed daunting. Each added community story helps the class explore the nuances of each SEL skill.

Start small and slowly build your library of stories, or look for just one shared story in each unit. Integrating shared narratives into your daily classroom routines provides opportunities for students to build and strengthen their social and emotional skills.