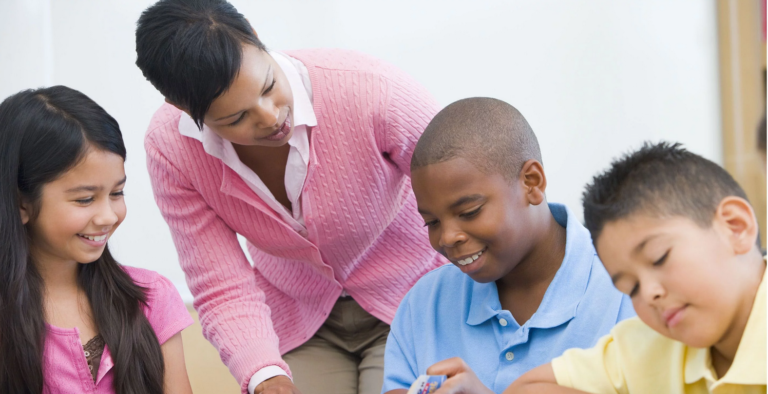 By Donna Wilson and Marcus Conyers
Reposted from Edutopia

Empathy is the ability to understand and share the feelings of another. Empathy has the capacity to transform individual lives for the better while helping to bring about positive social change in schools and communities worldwide. In psychology, there are currently two common approaches to empathy: shared emotional response and perspective taking.

Shared emotional response, or affective empathy, occurs when an individual shares another person’s emotions. An example from our own lives came when a group of friends joined Marcus as he crossed the finish line of a half-marathon—they threw their arms up just as he did, mimicking his stance. Individuals in an audience involuntarily mirroring a speaker’s smile is another example of this type of empathy.

Perspective taking, also known as cognitive empathy, occurs when a person is able to imagine herself in the situation of another. A good example is a line spoken by Atticus Finch (Gregory Peck) in the movie To Kill a Mockingbird: “If you just learn a single trick, Scout, you’ll get along a lot better with all kinds of folks. You never really understand a person until you consider things from his point of view . . . until you climb inside of his skin and walk around in it.”

Here are some strategies our graduates around the world use with their students to help develop both effective and cognitive empathy.

Teachers can be role models who, by example, show students the power of empathy in relationships. It is the teacher who leads individuals to care for the feelings of the others in class. As teachers model how to be positive when learning, students mirror optimistic and confident learning behaviors.

We use the numbers 6 and 9 to teach students about different points of view. First, have students look at the number 6 and then the number 9. Explain to students that the idea for this exercise came from an old Middle Eastern legend in which two princes were at war for many years. One prince looked at the image on the table and said it was a 6, while the other prince said it was a 9. For years the battle raged, and then one day when the princes were seated at the table a young boy turned the tablecloth around, and for the first time, they could see the other’s point of view. The war came to an end, and the princes became firm friends.

Illustrate with an example from your own life in which something similar has happened in terms of you arguing with somebody simply because they had a different point of view.

Ask students to break into small groups and discuss how important it is to understand that many people disagree with us simply because they have a different point of view. Debrief the student comments.

In the classroom, literature can be used to help students see a situation from different perspectives. For example, everyone knows the story “The Three Little Pigs.” We sympathize with the pigs because we see the wolf as a ravenous villain, but is it possible to see the story from the wolf’s point of view? That’s exactly what Jon Scieszka undertakes in his book The True Story of the Three Little Pigs. In this humorous retelling, the wolf didn’t huff and puff to blow the pigs’ houses down; instead he suffered from a terrible allergy and, when stopping by to borrow a cup of sugar, accidentally blew the houses down with a big and powerful sneeze.

LISTENING ACTIVELY TO OTHERS

One of the most common obstacles to empathic relationships is that effective listening is difficult, and often individuals don’t listen to one another in conversation. We designed the HEAR strategy to help students recognize and block out that noise as they devote their attention to listening to one another. The HEAR strategy consists of these steps:

Halt: Stop whatever else you are doing, end your internal dialogue on other thoughts, and free your mind to give the speaker your attention.

Engage: Focus on the speaker. We suggest a physical component, such as turning your head slightly so that your right ear is toward the speaker as a reminder to be engaged solely in listening.

Anticipate: By looking forward to what the speaker has to say, you are acknowledging that you will likely learn something new and interesting, which will enhance your motivation to listen.

BEING METACOGNITIVE ABOUT ONE’S STATE OF EMPATHY

Be aware of your feelings and thoughts about your ability to understand and share in the feelings of others. With metacognitive awareness, we can all become more effective at taking another’s perspective throughout our lives.

When we encourage students to become more empathic, we help them create more opportunities for success in school and other aspects of their lives. This valuable skill deserves more of our attention.