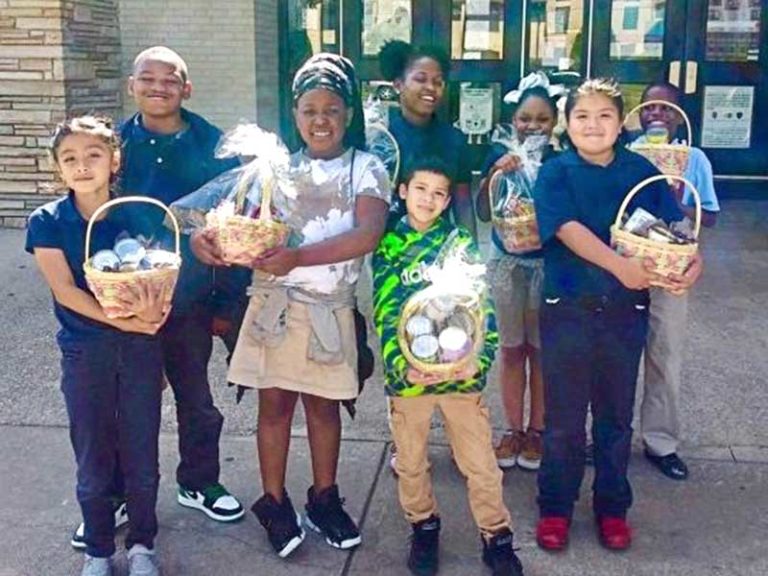 During April students from Martin Weiss Elementary learned the importance of community giving. As a part of Afterschool Quality Assessment standards, SEL Site Coordinators and their afterschool students are required to complete a community event. This was a youth-led service project, and students chose a food drive. To kick off spring, the idea was to give gift baskets filled with collected can goods. Following the service project, the staff developed a two-week lesson plan to teach the importance of giving back with healthy food options, and eating healthy regularly.

To help the student’s understand the importance of community giving, the students were read “Uncle Willie and The Soup Kitchen,” by DyAnne DiSalvo-Ryan. This was a great way to introduce the subject of helping poverty and homelessness to children, and encourage them to give back in their communities. In the story, Uncle Willie works part-time at the Soup Kitchen because he believes that sometimes people need a little extra help. The boy in the story becomes sympathetic toward people having a hard time making ends meet, he then finds a sense of pride in his uncle. By sympathizing with the boy in the story, it uplifted the class work as team making the food drive a big success.

After reading the book, the students were asked reflection questions. They were separated into two groups with age-appropriate questions for each age group. Group A was kindergarten through third grade and group B was fourth and fifth grade. The questions included:

2. When might a person need to visit a soup kitchen or food pantry? What experiences might they be going through?

3. Could you relate or identify with someone in the community center from the book?

4. Why is it important to give back to others?

5. What are some ways other than money that you can give back?

6. If you could give back somewhere, where would it be? Why?

To further engage the students, Weiss school counselor, Tiffany Daniels, started a food pantry initiative partnering the students with the North Texas Food Bank. As an incentive, the staff offered the students a pizza party, which motivated them even more. The students were very excited and continued to share how they wanted to help their own communities. The students ended up collecting more than 200 can goods! Half of the collected can goods were shared with the North Texas Food Bank, while the other half were used in gift baskets created by students.

SEL Coordinator Deborah Carey stated the only challenge was getting a speaker from North Texas Food Bank to talk about the food pantry to the students.

From learning to cook and promoting the food drive to visiting the food pantry, the youth demonstrated their commitment and perseverance throughout the project. The staff realized that the community service initiative was a success when they could see the enthusiasm and commitment of the youth for the project — and the smiles on the student’s faces.