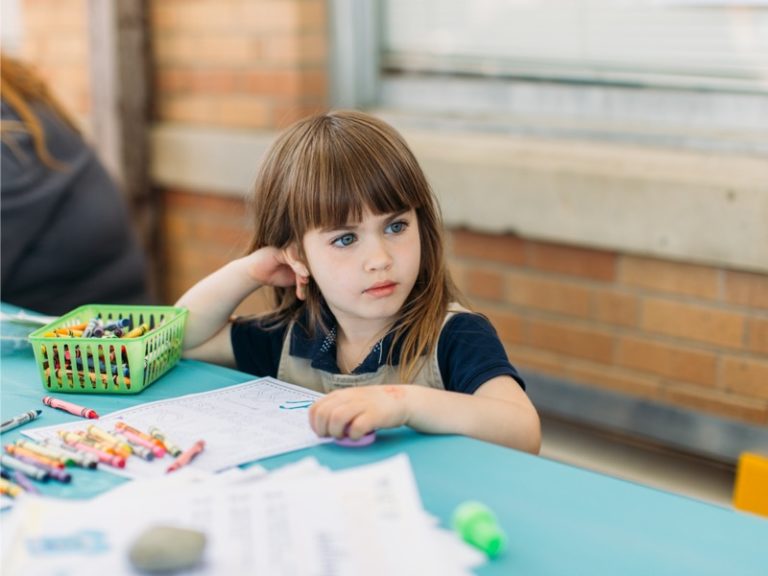 In schools across America, perseverance is making a comeback, respect is getting its due, and relationships are as much a part of the lesson plan as reading, writing, and arithmetic.

Teachers call it social and emotional learning, or SEL. Its goal is to give students the skills they need to work in teams, communicate their ideas, manage their emotions—even stand up to a schoolyard bully. For anyone who has ever complained that kids these days don’t have the strength of character, the stick-to-it-iveness, of previous generations, here’s one way to better ensure they do.

But this is still a new frontier for American education. Only a handful of states have standards for social and emotional learning, and key federal education laws make no mention of it. RAND researchers have worked in recent years to better define what works in SEL, how more schools can implement it, and—importantly—how to assess student mastery of something like empathy or self-control.

“These are skills that students need to succeed in jobs and in life,” said Laura Hamilton, a senior behavioral scientist at RAND. “Employers and colleges have said that many high school graduates have not developed these skills adequately.”

Stephan Molder greets his ninth-grade students with high fives and fist bumps outside his classroom at Procter R. Hug High School in Reno, Nev. He’s an SEL specialist, and these are the front lines: six classes a day of teenagers trying to navigate the social and emotional warzone that is adolescence. He’s been known to drop an egg on the floor to show them what a lack of resilience looks like.

But one of his first lessons every year is on how to give a proper handshake. No finger squeeze, no soft touch. It’s a lesson, really, in self-confidence, poise, social awareness, and respect. “Life is all about relationships,” he says. “Kids need to practice a good handshake just as they need to know how to make a mistake and learn from it, how not to give up, how to have perseverance and grit and determination to do well.” 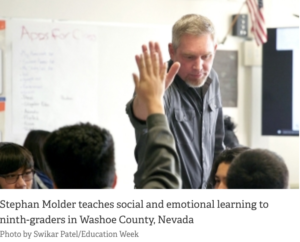 What’s new here is not so much the idea that social and emotional skills are just as important as reading comprehension and multiplication tables. It’s the approach. Once left mostly to the rough-and-tumble of the playground, social and emotional learning is now a daily part of the curriculum for hundreds of thousands of students.

That might mean a lesson on teamwork slipped into a tough math activity for a class of second-graders. Or it might mean a stand-alone class for high school freshmen, like the one Molder teaches, on how to live, work, and succeed.

There’s no single definition of what SEL is. But one popular framework, from the Collaborative for Academic, Social, and Emotional Learning, identifies five core competencies for students to master:

Imagine an ideal teammate at work or the perfect neighbor. That’s the goal.

Hundreds of SEL programs and lesson plans have hit the market in recent years, with names like “Steps to Respect,” “Playworks,” and “Go Grrrls.” Yet school districts have had little guidance to help them weigh the pros and cons of different programs, or even separate those that work from those that don’t.

RAND researchers identified 60 of the most promising and proven SEL interventions.

Researchers at RAND sifted through thousands of program evaluations to identify 60 of the most promising and proven SEL interventions. They found that the evidence base for those programs is strong enough to qualify them for federal funding under the Every Student Succeeds Act—even though the act itself does not formally recognize SEL.

Nearly three-quarters of the programs had a demonstrated track record of helping students work better with others by improving skills like teamwork or communication, the researchers found. More than half helped build up their confidence, initiative, or other personal skills. A quarter improved school safety and climate.

But how do you know when a student has mastered confidence or teamwork? When researchers dug into that question, they found dozens of tests meant to assess everything from childhood resilience to teenage decisionmaking—but, again, few resources to help schools and teachers choose the right one.

RAND researchers have compiled information on more than 100 SEL assessments, from how long they take to what skills they measure. In the coming months, they plan to publish their findings as a free, online repository that will allow educators to search for and compare assessments that best meet their needs.

“Good teaching depends on having good assessments,” Hamilton said. “Our hope is that this will give teachers the tools they need to understand where their kids are, what they need, and how they can build up those skills.”

RAND is working with the nonprofit Wallace Foundation to test some of those lessons in the real world.

Researchers are following six large, mostly urban school districts as they implement SEL strategies not only in the classroom but also in after-school activities and clubs—“really from the moment you get on the school bus,” Hamilton said. The study is one of the largest and most ambitious ever undertaken of social and emotional learning. Researchers expect it to take seven years.

That happens to be almost exactly how long Trish Shaffer has been at the center of one of the most pioneering SEL efforts in the nation.

She coordinates that effort in Washoe County, Nev., best known as the home to the biggest little city in the world, Reno. The district there, which is not part of the RAND study, expanded its classroom teaching to focus more on social and emotional skills as its graduation rate slipped toward 50 percent. It worked with social scientists and with students to develop its own assessments, brought in specialists, and has seen its graduation rate climb past 80 percent. Stephan Molder teaches life skills and good handshakes there.

Not long ago, Shaffer met a high school girl who had just survived a teenage rite of passage: a customer at the restaurant where she worked, furious at a fumbled order. The girl confessed that she would have once cried and run away. Instead, she calmly talked the customer down. It was nothing, she shrugged; they had practiced that exact scenario in class.

“That is a necessary skill for life effectiveness,” Shaffer said. “I think we owe that to our kids. That is a skill that many adults don’t have—and it’s a skill that most people desperately need.”

The Importance of Family Engagement: How to Bring Social and Emotional Learning Home

Throughout the summer, Dallas ISD's Social and Emo

What books are on your summer reading list? 📚 F

What does your family's plan for the summer look l

Since November, @dallasisd’s SEL Department has

This #ThoughtfulThursday, we're reflecting on than

Looking for a way to enjoy the outdoors and practi

Each unit in our OST Curriculum Guide features lit